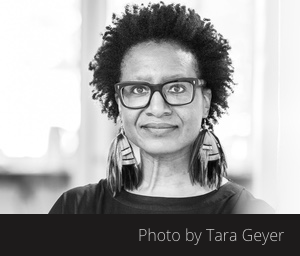 Kilolo Luckett is a Pittsburgh-based art historian and curator. With over twenty years of experience in arts administration and cultural production, she is committed to elevating the voices of underrepresented visual artists, specifically women and Black and Brown artists.

She is a contributing writer to the exhibition publication Halston & Warhol: Silver & Suede. Luckett is also writing an authorized biography on Naomi Sims, one of the first Black supermodels.

Luckett was a recipient of the 2015 Mayor’s Award for Public Art for the Homewood Artist Residency and Women and Girls Foundation Women in the Material World Award. She was an honoree of the 50 Women of Excellence by the New Pittsburgh Courier.  She is a former board member for the Braddock Carnegie Library Association, YMCA – Homewood branch, and Design Center Pittsburgh.