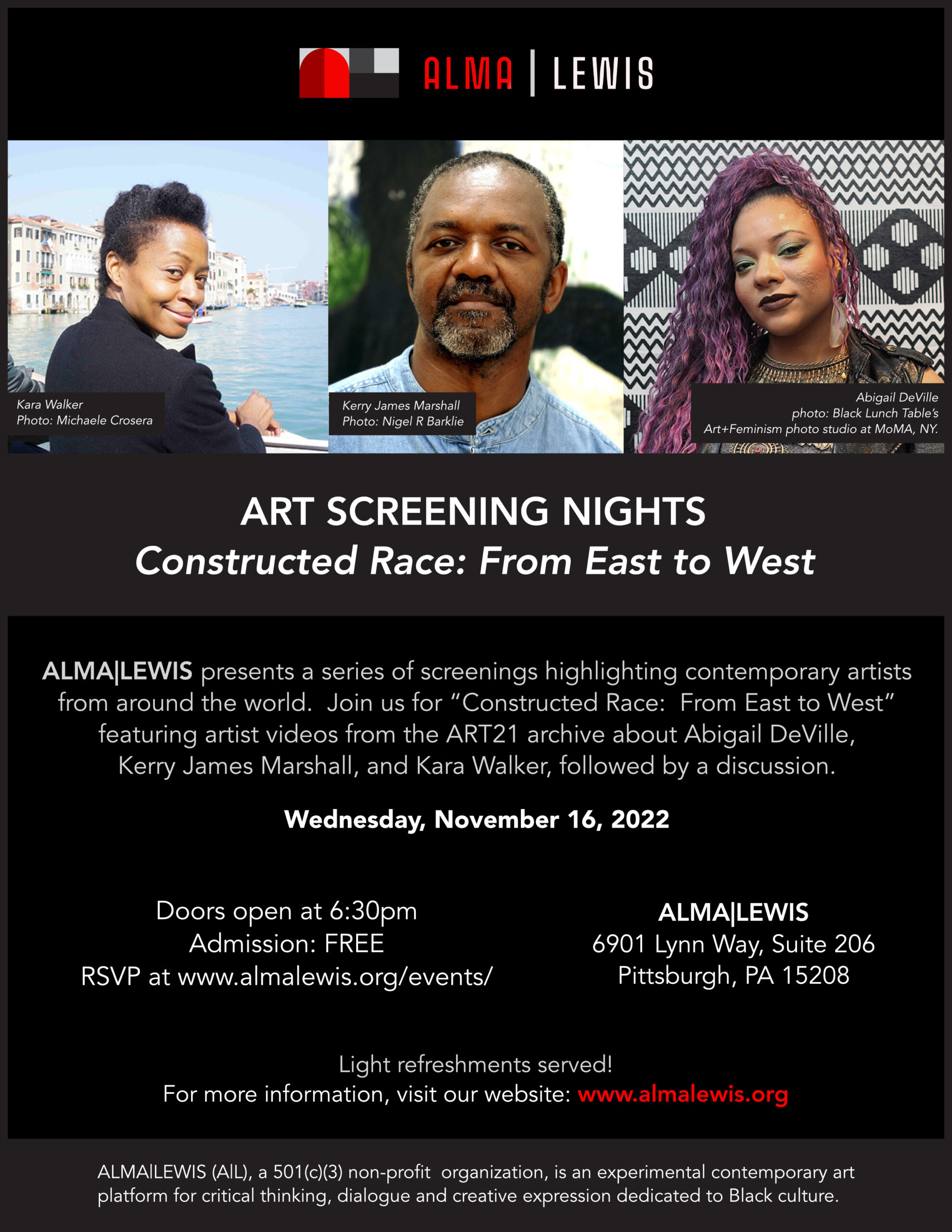 ALMA|LEWIS presents a series of screens highlighting contemporary artists from around the world.  Join us for “Constructed Race:  From East to West”  featuring artist videos from the ART21 archive about Abigail DeVille, Kerry James Marshall, and Kara Walker, followed by a discussion.

Abigail DeVille was born in 1981 in New York, where she lives and works. Maintaining a long-standing interest in marginalized people and places, DeVille creates site-specific immersive installations designed to bring attention to these forgotten stories, such as with the sculpture she built on the site of a former African American burial ground in Harlem.

DeVille often works with objects and materials sourced from the area surrounding the exhibition site, and her theatrical aesthetic embodies the phrase, “One person’s trash is another person’s treasure.” Though collected objects are essential to her installations, DeVille’s priority is the stories her installations can tell. DeVille’s family roots in New York go back at least two generations; her interest in the city, and her work about it, is both personal and political.

Kara Walker was born in Stockton, California, in 1969. She received a BFA from the Atlanta College of Art in 1991, and an MFA from the Rhode Island School of Design in 1994. The artist is best known for exploring the raw intersection of race, gender, and sexuality through her iconic, silhouetted figures. Walker unleashes the traditionally proper Victorian medium of the silhouette directly onto the walls of the gallery, creating a theatrical space in which her unruly cut-paper characters fornicate and inflict violence on one another.

Kerry James Marshall was born in 1955 in Birmingham, Alabama, and was educated at the Otis Art Institute in Los Angeles, from which he received a BFA, and an honorary doctorate (1999).

The subject matter of his paintings, installations, and public projects is often drawn from African American popular culture, and is rooted in the geography of his upbringing: “You can’t be born in Birmingham, Alabama, in 1955 and grow up in South Central [Los Angeles] near the Black Panthers headquarters, and not feel like you’ve got some kind of social responsibility. You can’t move to Watts in 1963 and not speak about it. That determined a lot of where my work was going to go,” says Marshall.

Popcorn and light refreshments will be provided.

These series of events are made possible with the incredible ART21 video archive.